HRH Mag’s Andy Spoors has rarely experienced a more enlightening year as far as new (and reimagined) rock and roll is concerned: here he brings you his top picks from 2016.

From sweaty old bingo halls to stadium fillers, Biffy have had the journey rock dreams are made of. Ellipsis is packed with stadium anthems from start to finish that should convert any long term fence-sitters into fans.

No doubt KOL will split fans new and old for the rest of their career but lyrically the band are sharp as a razor. Their storytelling on track Over is an example of a band comfortable with experimenting with their classical sound.

Ok so it’s a bit of a cheat but the inclusion on this list is completely warranted. The addition of three new tracks, including a stripped back You and I, demands another listen. If this is any indication of what the band can do with their next effort, due next year, rock fans are in for a treat.

After a self-imposed hiatus and what seems like some serious soul searching, Jimmy returned with a cracking effort. This record featured some of the band’s best songs since Bleed American or Futures. The heavier sound of Get Right was a breath of fresh air from a band that deserves so much more respect.

Swedish rockers Royal Republic may still be relative strangers to mainstream UK music lovers but they are slowly making a splash in mainland Europe and Scandinavia. It’s certainly no surprise when you hear Weekend Man. A fun filled effort that will dig i’s way into your brain and leave you wondering how Sweden became one of the last bastions of rock.

So much more than a re-issue and a chance to break new ground with old songs. Eighties icons Heart smashed back onto the scene with some re-imaginings and some new tracks to boot. To attempt a come back in an age of nostalgia may not be brave but filling an album with psychedelic rock certainly is. A brilliant example of a band determined to show they’re not just here to sing the classics.

In terms of 2016 releases, you can’t overlook The Boss. A collection of rare recordings and greatest hits, anyone wanting to gain a snapshot into Springsteen’s career need look no further. Serving as a soundtrack to his latest memoir Born To Run, the compelling Chapter And Verse catalogues the life of one of the greatest in the history of rock and arguably music itself. That in itself warrants a place here.

8. Panic! At The Disco – Death Of A Bachelor (Atlantic)

Opinions on the band aside, Panic! delivered a hit of pop rock with their latest effort Death Of A Bachelor. In a year where Paramore, Fall Out Boy et al have been absent, Brendon Urie’s mob were left as the standard bearer for the genre. It’s cheesy and incessantly catchy. Everything you should have been expecting.

A breathless release from the off. It’s been three years since their last effort and it would appear the boys have spent that time resting up, ready to release all their energy into a superb album. Growling vocals and catchy hooks that slide from metal into pop rock and back with ease.

10. The Pretty Reckless – Who You Selling For (Virgin EMI)

An effort aching with the sounds of the band’s musical influences. Momsen’s husky and raspy vocals sound better with each each album with bluesy and big hitting rhythms providing a perfect foil. I’m not sure who’s selling, but I’m buying… 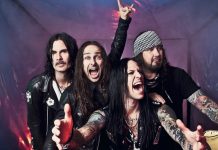