Since bringing their own brand of “Triumphant, chest-beating Rock” to HRH Road Trip last year, Northampton four-piece EMPYRE have galvanised legions of new fans whilst on the road with the RPM Takeover Tour and through several UK festival appearances this summer. With the recent release of their eagerly awaited debut album, the hard rock powerhouse’s realm has been fortified like never before…HRH Mag’s Anne Estella spoke with the guys from Empyre…

For anybody who’s not familiar with your music, how would you describe your sound?

[Henrik] We describe it as dark, intense and somewhat atmospheric rock. Other people have called it contemporary rock, atheist rock, hard rock, and “the love child of Pink Floyd and Soundgarden”. It’s a combination of the roots of Rock’s tradition alongside some dark, introspective songwriting, but don’t expect dreary and depressing… expect intense, sometimes raw, sometimes anthemic rock. We’re not sure if it all fits into one overall category.

[Did] We have a plethora of influences from varying styles, anything from the Seattle era of ‘90s grunge rock to blues artists, hard rock, country and more contemporary singer songwriters. There are aspects of prog, hard rock, and the set even includes some anthemic dark ballads in places.

When was EMPYRE formed and how did you all meet? What are your backgrounds – were you all in other bands previously?

[Henrik] Did and I had played in a covers band for years, and we slowly started writing our own stuff. Up until three years ago we were basically a practice-room band, writing some songs but hardly gigging. Prior to late 2016 we had done three gigs I think. We had recorded a couple of EPs but without much of a plan as to what to do with them or what to do next. Then, after a couple of us decided to take it a lot more seriously we made a change to the way we do things. We formulated a plan, set some goals, got out gigging consistently across the country and decided to produce an album. Grant lives locally to us and joined us two years ago, and Elliot, whilst we have known him for a few years, we’d never gigged with. When the last drummer left, he was the obvious choice as a replacement.

[Grant] I joined the band two years ago after a long and rigorous audition process! Before EMPYRE I played in a covers band and many years before that an originals rock act.

[Elliot] After following EMPYRE for the last couple of years I got the opportunity to become their new drummer about four months ago, which has been by far the best decision I have made with my drumming. Before joining EMPYRE I played in many different cover bands over the years as well as being a dep drummer for many others.

You made quite an impact on the recent RPM Takeover Tour – what were the most memorable moments of the tour for you?

[Henrik] Easily our hometown headline show in Northampton. We’d never seen The King Billy that full! The vibe in the place was unbelievable. The other thing that sticks in my mind is touring with The Rocket Dolls and Ryders Creed which has been so easy, relaxed and enjoyable. We’ve been lucky so far, most bands we’ve gigged with have been friendly and easy to work with and it makes such a big difference to the atmosphere. So, a big shout out to those guys for being so cool!

[Grant] My hair got tangled up in Henrik’s guitar during the outro riff in ‘New Republic’! We had to finish the song and set (fortunately it was the last song) attached to each other. Luckily I didn’t lose too much hair but I did break Henrik’s guitar…

[Did] The tour in itself was the highlight as it provided us with an opportunity to play venues throughout the UK that we hadn’t gigged at before. The bands on the road with us are great guys and their sets were massive! The Rocket Dolls and Ryders Creed are two rock acts we’d be happy to share the stage with again. We also got to perform our new tracks live prior to the album dropping on 5th July. The response to the new tracks was very encouraging!

[Elliot] The RPM tour was incredible and it was great to be able to play some amazing venues across the UK with some fantastic bands. The most memorable moment of the tour has to have been playing our hometown show at The King Billy, Northampton, which was just mind-blowing with the amount of people that came out to see us.

You played HRH Road Trip to Ibiza last year, what was that experience like?

[Henrik] We got to do three gigs and play two awesome venues. How many people can say they played an amphitheatre seal enclosure with arctic backdrop in Ibiza?! It was very special and we’d love to return.

[Did] I am a pale-faced/ginger-esque guitarist and I tend to hide away in the shade in warmer climates! Ibiza in May was spot-on weather-wise so I was still able to wear jeans and cowboy boots for the whole trip. Not really into shorts and flip-flops, not very Rock ‘n’ Roll! The main gig at Eden club, where all the DJs normally do their club sets, was an ideal venue to have a rock show. That venue has been a highlight for EMPYRE as a whole so far. HRH Road Trip 2020 – invite us back, please!

You performed an acoustic set at SOS Fest in July – what other gigs and festivals have you played this summer?

[Did] We had a hometown show on the main stage at Northampton Music Festival (NMF) on 16th June – there are a couple of Northampton venues that we gig at throughout the year. NMF is a good opportunity to present our music to our home county and gather some new fans and encourage them to “join the EMPYRE”. We also played a festival called Front Row Festival, which is a multi-genre event in Bicester, on 29th June. A really special event was an acoustic performance that we gave on the Firestone stage at Birmingham Arena on 28th June – the same evening that the Eagles played, which was very cool!

It is refreshing to mix up live sets sometimes, as when we do acoustic sets the arrangements and the overall dynamic of the music changes. ‘Only Way Out’ brings in the piano together with acoustic guitars and the song becomes something new. We love the MTV-style unplugged sets of yesteryear from the likes of Pearl Jam, Nirvana, Eric Clapton, Stone Temple Pilots, Alanis Morissette, Incubus, and even The Corrs, so we try to approach the acoustic side of EMPYRE in that light.

Anyone curious about what’s going on with EMPYRE should head over to our website or social media pages. For hardcore fans, we have a fan group that is growing on Facebook and a newsletter that lands in your inbox once every six weeks that has all our news and updates.

What’s the story behind your single ‘Too Little Too Late’?

[Henrik] That single was the first release from our album, ‘Self Aware’, which came out on 5th July. The song was inspired by the breakdown of a relationship, so might strike a chord with anyone who has any angst towards their exes! The theme goes along the lines of:

“An exploration of an obsessive and toxic relationship preceding, during and after its collapse. Initially, your pride is damaged and your emotions feel like they have been severely tainted. Ultimately, you turn your resentment into detachment, realising you have come out better off than the other person involved.”

The single also has a music video that we filmed last year and is available to view on YouTube. It features the artwork from the single and conveys the lyrics with two actresses portraying the difficult relationship. It’s gritty, a bit raunchy even, and Facebook just banned us from advertising it, spoilsports.

Tell us about your debut album!

[Did] We are extremely proud of our first album release. We aimed for an album with “no fillers”. It showcases every aspect of our music in eleven tracks so it is a strong representation of who we are and our overall sound.

Apart from the bands you played alongside on the RPM Takeover Tour, who are your favourite bands right now?

[Did] Nine Miles South – we played with these guys at The Big Red in Islington and they are really worth checking out. We like bands that avoid cliche, are genuine, and are doing something a little bit “different”. These dudes are fusing a huge rock sound with southern country aspects – a great crossover style. Also Lethbridge Owen are really worth checking out. Their debut album ‘Mind over Matter’ is also out now. Jimmy is a stunning guitarist and Kelly adds her great vocals to some unique songwriting. They have a refreshing sound.

What is your favourite decade for rock music and why?

[Henrik] Probably the ‘90s – that’s when the music around first inspired me to pick up a guitar and try to sing.

[Did] Hard question to answer as I don’t tend to favouritise anything! The ‘60’s and ‘70’s revolutionised popular music with Hendrix, Jeff Beck, Clapton and the likes of The Kinks and Led Zeppelin opening the door to a rock ‘n’ roll revolution. I don’t think guitar music would exist in the same way if it weren’t for innovators like Hendrix.

[Henrik] To play the biggest rock festivals around the world!

[Did] I am fortunate enough to do music full time. I’d love to get to the point where other certain musical obligations are lessened and I have more time available in a week to dedicate to songwriting and pushing EMPYRE to get it to a wider commercial level. That would be my goal! 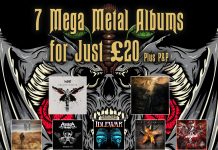 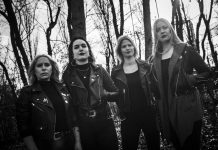